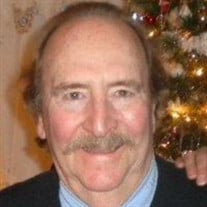 Wayne Paul Anton, 83, passed away July 12, 2021. Born in Johnston, he was a son of the late Salvatore Frank and Martha Mildred (Blackmar) Anton; beloved husband of Linda Anne (Souza) Anton; devoted father of Paula Jean DeBeque, Kimberly Ann Pennacchia, stepchildren Julie Hughes & Christopher Caldwell; son-in-laws Marvin DeBeque and Paul Pennacchia; cherished grandfather of Emily Barnes, SPC David Craddock US Army & his wife Nichole, and great-granddaughter, Evelyn Grace, and grandfather to Christopher & Richard Hughes. He was also the brother of the late Frank Anton. Wayne spent 6 years in the U.S. Navy on the USS Halfbeak submarine & crossed the Arctic Circle twice, thus earning two “Bluenose” certificates of merit. On one of those missions, his ship served as the “backup” ship to the Nautilus. After leaving the armed services, he was the proprietor of Wayne Hardware on Hartford Avenue in Providence, RI for several years until he sold the hardware store in the mid 1960’s. He then went to work at PPG as a paint salesman until his semi-retirement in the mid 1980’s. After that, Wayne was self-employed and was the proprietor of Sounds & Such & Creative Audio until his passing. Among his hobbies he enjoyed playing golf, fishing, going to the beach, dining at various restaurants, socializing and spending time with family & friends. Funeral Service with Military Honors will be held Friday, July 23, 2021 at 11:00 a.m. at the Rhode Island Veterans Memorial Cemetery, 301 South County Trail, Exeter. His Celebration of Life will be held at 12:30 p.m. at the Tri-City Elks 1915 West Shore Road, Warwick, RI 02889 If you would like to send flowers to the family, please have them delivered to Winfield & Sons Funeral home, 571 W. Greenville Rd, Scituate, RI 02857 by 2:00 p.m. Thursday, July 22nd or donations may be made in Wayne Anton’s honor to the Veteran’s Hospital.

The family of Wayne Paul Anton created this Life Tributes page to make it easy to share your memories.