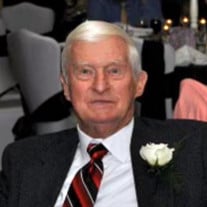 Walter E. Daigneault began his final walk home on January 16, 2022. Born July 12, 1924 in Cumberland, RI to Alfred and Adiana (Plante) Daigneault, he resided most of his life in Cumberland. He was a resident of 1 Mendon Rd. in Cumberland from 2008 until 2021. This past April, he took final residence at the RI Veterans Home in Bristol, RI. He was especially proud to have been welcomed into the Veterans Home community. His family is truly grateful for the camaraderie and care that he was blessed with while living at the RI Veterans Home for the last nine months of his. Walter is predeceased by his wife Lillian (Lanois), who he was married to for 60 years. He was a US Army veteran of WWII, having served in the European theater from 1943 until 1946. SSgt Daigneault was a survivor or the Christmas Eve 1944 sinking of the US troop transport ship S.S. Leopoldville in the English Channel, in which he was awarded a Purple Heart for injuries sustained in the torpedoed sinking. He is a past president of the Bacon-Auclair chapter of the Purple Heart Association. Walter worked most of his career in the textile industry in RI & MA, finishing his employment with Quaker Fabrics in Fall River, MA. Walter was a talented wood craftsman and gardener, who enjoyed creating wooden toys and furnishings for family, friends & neighbors. In his younger days, he was a member of the Manville Rod & Gun Club and an avid golfer, playing in many leagues in RI & MA. He especially enjoyed walking, most frequently at the Monastery in Cumberland, around Lincoln Woods Park or along the Blackstone Valley bike paths in Cumberland & Lincoln. At age 95, he still walked around Lincoln Woods at least three times each week, and he looked forward to meeting with many fellow veterans and new friends in his travels. Walter is survived by his three sons, Al Daigneault (Carol) from Danielson, CT; Richard Daigneault (Cynthia) from Lincoln, RI and Ronald Daigneault from Woonsocket, RI. He also leaves behind 3 granddaughters, 4 grandsons, 4 great granddaughters and 6 great grandsons. In addition, he leaves his sisters Lucille Allard (North Smithfield); Gertrude Foisy (Webster, MA); Vivian Gagnon (Cumberland) & Jeanine LaRoche (Woonsocket). He is predeceased by his brothers Robert and Arthur (Red) Daigneault and sisters Pauline Poisson and Constance Gignac. A Mass of Christian Burial will be held Saturday, April 23, 2022 at 10:00 a.m. in St. Joan of Arc Church, 3357 Mendon Road, Cumberland, RI. Burial with Military Honors will immediately follow at St. James Cemetery in Manville, RI. Visitation hours are omitted. The family request that all attendees follow the CDC mask guidelines. In lieu of flowers, donations in Walter’s name may be made to the RI Veterans Home on Metacom Ave. In Bristol, RI.

Walter E. Daigneault began his final walk home on January 16, 2022. Born July 12, 1924 in Cumberland, RI to Alfred and Adiana (Plante) Daigneault, he resided most of his life in Cumberland. He was a resident of 1 Mendon Rd. in Cumberland from... View Obituary & Service Information

The family of Walter E. Daigneault created this Life Tributes page to make it easy to share your memories.