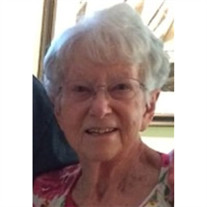 Vivian Gadoury Searle, age 84, passed away peacefully December 14, 2014, after a courageous battle with Parkinson™s Disease.She was the beloved wife of Francis Knight Searle of Scituate, RI. They had been married for over 60 years. She was the daughter of the late George Peter Gadoury and Judith (Johnson) Gadoury. Born in West Warwick, one of eight children, she graduated fromCoventry High School and Boston University. She was a physical education and health teacher for the Coventry Public School System before retiring.Besides her husband she leaves five children, Charlene Jarest and her husband Jake of Rehoboth, George Searle and his wife Nancyof Hope, Arthur Searle and his wife Maureen of Hope, Kenneth Searle and his wife Kathleen of East Greenwich, and Janet Bellows and her husband Rob of Hope. She was the loving grandmother of Jessalyn, Katherine, Rebecca, Wendy, Katie, Zachary, Abigail, Danny,Emily, Jessica, Allison, and great grandmother of Nathan and Hazel. She is predeceased by her brothers Norman, Irving, Richard and George, and sisters Beatrice Reynolds, and Anna Johnson. She is survived by her sister Marion Drew.Vivian was a member of Fiskeville Tabernacle Baptist Church and the extended church family of North Scituate Baptist Church.Vivian was very active in mission outreach and loved singing in choirs - she played the organ and piano at several area churches. She encouraged the love of music in her children, grandchildren, and many whom she lead in worship. As a lifelong resident ofthe area, she was also actively involved with the Hope Historical Society - preserving the community she loved.Calling hours will be held at Winfield & Sons in North Scituate, RI on Thursday, December 18 from 3:00 PM to 7:00 PM. A privatememorial and burial will take place on Friday. In lieu of flowers, donations to your favorite charity in Vivian™s name are encouraged.

Vivian Gadoury Searle, age 84, passed away peacefully December 14, 2014, after a courageous battle with Parkinson&#8482;s Disease.She was the beloved wife of Francis Knight Searle of Scituate, RI. They had been married for over 60 years. She... View Obituary & Service Information

The family of Vivian Searle created this Life Tributes page to make it easy to share your memories.