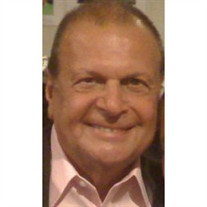 Robert Anthony Pulciani, 73, of Providence, RI, died peacefully in his home on November 10th, 2014. He was born on December 15th, 1940 in New Haven, CT to Francesco (Frank) and Theresa DeBrigita Pulciani. He is survived by his loving wife, Christine Louise Pulciani of Providence, RI and his children; Tracy Maag and husband William, Kimberly Monahan and husband Michael, Robert Anthony Pulciani Jr. and wife Michelle, Diane Lupton and husband Mark, Angela Johnson and husband Richard, and Alysia Moreland. He is also survived by his grandchildren Taylor, Courtney and Ian Maag, Robert Baron, Annalea Lupton, Amanda and Joseph (JT) Monahan, Isabella and Bianca Pulciani, his sister-in-law, Anne Pulciani, and numerous beloved nieces and nephews.He is preceded in death by his parents, his sister Jean Pulciani Pacelli, his brother Michael Pulciani, and his sister Mary Catenza.He was a graduate of Hillhouse High School in New Haven, CT and he also attended the Citadel Military College, SC, Fairfield University, CT, and Suffolk Law School, MA. His career included 35 years as a Chief Financial Officer, primarily in the apparel and luxury goods sector, most recently at Ross-Simons and Sidney Thomas Jewelers. Although dedicated to his profession, he enjoyed attending his grandchildren™s many sporting events, the opera, and New York Yankees baseball games. He loved Sudoku puzzles and was an active member of Grace Church where he was involved with many of its ministries. Robert was proud of his Italian ancestry and made numerous trips to Pofi, Italy to see his many relatives living there. He was an influential leader in business and a loving and devoted husband, father and grandfather. He was a dignified man of strong faith. He collected and nurtured countless friendships, crossing all boundaries to be hospitable and kind to everyone. His memory lives within our hearts.Hebrews 13:1-2 Let brotherly love continue. Do not neglect to show hospitality to strangers, for thereby some have entertained angels unawares.A public memorial service to celebrate Robert™s life will be held on Saturday, November 22nd, 2014 at 11:00 am at Grace Church Providence, 175 Mathewson Street, Providence RI 02903.In lieu of flowers, contributions in Robert™s memory can be made to the music and youth programs at Grace Church Providence, 175 Mathewson Street, Providence, RI, 02903.

Robert Anthony Pulciani, 73, of Providence, RI, died peacefully in his home on November 10th, 2014. He was born on December 15th, 1940 in New Haven, CT to Francesco (Frank) and Theresa DeBrigita Pulciani. He is survived by his loving wife, Christine... View Obituary & Service Information

The family of Robert Anthony Pulciani created this Life Tributes page to make it easy to share your memories.