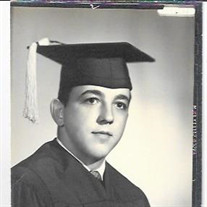 Robert Michael Eichorn, 83, of Johnston, passed away on April 16th after a short illness. He was the husband of Maureen Ann (McGowan) Eichorn for 62 years. Robert was born in San Francisco, CA and raised in Mount Shasta, CA. He later was stationed at the Quonset Airbase in Rhode Island, while serving in the United States Navy and received an honorable discharge. He met his bride to be at a dance in Providence, RI and the two settled in the small town of Harmony, RI where they resided for over 50 years. He was employed by Kaman Aerospace in Moosup, Ct. for 40 years as a Structural Engineer and later became the Chief Engineer of the complete construction of the Navy’s SH 2 Helicopter. During his employment, he received a Bachelors Degree in Business Administration from the University of Rhode Island. He had a love for Rhode Island foods; New York System Hot Weiners and seafood of all kinds. He loved the beach and would take the family to Horseneck beach in MA weekly and Cape Cod and Rocky Point yearly. After his retirement; Robert and Maureen traveled to Las Vegas, Italy, Ireland and many Cruises all over the world. Robert was a well respected member of the Glocester community and enjoyed all sports. He was an avid fan of the New England Patriots and Boston Red Sox. Locally he was a coach for the Glocester Little League baseball teams and one of the Founders and coach of the Foster-Glocester Pre-teen Football League. He was predeceased by his parents, Arthur F. Sr. and Mary A. Eichorn and his only sibling, Arthur F. Eichorn, Jr and wife Peggy Eichorn. He leaves behind his three children; Mary A. Romajas (Bruce) of Amston, CT; Robert M. Eichorn, Jr. (Noi) of Santa Fe, NM; and Steven W. Eichorn (Karen) of Clifton Park, NY and his three grandchildren; Julie Dessert, Holly-Ann Martin, Sabina Eichorn and five great-grandchildren. He will also be missed by his remaining West Coast family; Kim Eichorn, Niece and Bob DaPrato, Nephew. Funeral will be private. Donations can be made in Robert’s name to the Northern Rhode Island Food Pantry, PO Box 7833, Cumberland, RI 02864 and/or Friends of Assisi Food Bank, 77 Water Street, Danielson, CT, 06239

Robert Michael Eichorn, 83, of Johnston, passed away on April 16th after a short illness. He was the husband of Maureen Ann (McGowan) Eichorn for 62 years. Robert was born in San Francisco, CA and raised in Mount Shasta, CA. He later was stationed... View Obituary & Service Information

The family of Robert Michael Eichorn created this Life Tributes page to make it easy to share your memories.

Robert Michael Eichorn, 83, of Johnston, passed away on April...