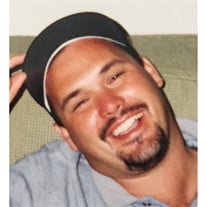 Peter Barry McFarland, age 48, passed away suddenly on February 6, 2016 at his home in Greenville,, South Carolina. Born in Providence, Rhode Island, Mr. McFarland was the son of Clifford L. McFarland and the late Dorothy (Barry) McFarland. In addition to his father, he is survived by his sister, Celeste (McFarland) Marro and her husband Michael as well as his nephew and nieces, Michael, Katherine and Sophia Marro, all of whom loved him very much. Mr. McFarland was a graduate of Boston University and Bishop Hendricken High School in Warwick, Rhode Island. After college he worked in the family business, Read & Lundy, Inc. in Providence Rhode Island. He became a resident of South Carolina when he relocated there in 1993 to open and operate JIT Industries of South Carolina, Inc., a top industrial distributor in the southeast, specializing in tooling and cooling solutions. As the owner of the company, Mr. McFarland was a well known and loved member of the Easley community where he was active in social and community pursuits. Memories of Peter were shared by his many friends in the South Carolina community at the Blockhouse Restaurant and Oyster Bar in Greenville South Carolina where a celebration of his life was held on February 17, 2016 to honor and remember him. Mr. McFarland enjoyed his life in South Carolina attending Clemson football games, but he never lost his allegiance to his New England sports teams especially the New England Patriots and the Boston Red Sox. Peter loved the Patriots so much that he became a season ticket holder and would return to New England to attend as many home games as possible. He is remembered with much love and sadness at his loss by his many cousins and friends in Rhode Island and his many friends and employees in South Carolina. A graveside service will be held at his family™s cemetery in Tiverton, Rhode Island at a yet to be announced date.

The family of Peter Barry McFarland created this Life Tributes page to make it easy to share your memories.