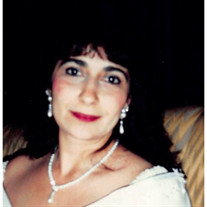 CARNEVALE, PAULA A. ROSE, 59, of Clayville, passed away quietly at home with her family Monday, January 25, 2016 after a year-long battle with cancer. She was the beloved wife of Anthony G. Carnevale.Born in Providence, Rhode Island, she was a daughter of Henry Rose, Sr. and Pauline A. (Tessier) Rose of Scituate. She was a resident of Scituate for 30 years. Paula was the proud owner of Pineapple Rose Primitives, a country and primitives store in Scituate, for the past 6 years. She was a graduate of East Providence High School Class of 1974. Her life was a celebration of artistic accomplishment and service. She was a ballet dancer, an accomplished award-winning florist, a Lieutenant on the Scituate Ambulance Corps, a seamstress, an avid collector of antiques, and most importantly, a devoted mother and grandmother.Besides her husband of 20 years, she is survived by seven daughters: Melissa Rose and Adrienne Carnevale of Scituate; Brenna Carnevale of Johnston; Nicole Giguere of Killingly, Connecticut; Toni Marie Carnevale of Thompson, Connecticut; Katherine Stines of Virginia Beach, Virginia; and Ashlee Kittle of Tampa, Florida. She is also survived by one brother, Henry Rose Jr. of Newport; three sisters, Susan Begosian of Rehoboth, MA, Cynthia Toro and Jeannine Besser of Scituate; and 11 beautiful grandchildren: Mikeila, Victoria, Anthony, Cason, Matthew, Angelina, Zoe, Philip, Ryan Jr., Margaret, and Lillian.Calling hours are at Winfield & Sons Funeral Home, 571 W. Greenville Rd, Scituate, RI 02857 on Sunday, January 31st from 1:00 5:00 p.m. There will also be a Mass of Christian Burial on Monday, February 1st at 11:00 a.m. at St. Joseph™s Church, 144 Danielson Pike, N. Scituate, RI. We would welcome all who knew her to celebrate her life.In lieu of flowers, the family requests that donations to the Scituate Ambulance Corps (http://www.scituateambulance.com/) be considered.

CARNEVALE, PAULA A. ROSE, 59, of Clayville, passed away quietly at home with her family Monday, January 25, 2016 after a year-long battle with cancer. She was the beloved wife of Anthony G. Carnevale.Born in Providence, Rhode Island, she was... View Obituary & Service Information

The family of Paula Ann Carnevale created this Life Tributes page to make it easy to share your memories.

CARNEVALE, PAULA A. ROSE, 59, of Clayville, passed away quietly...