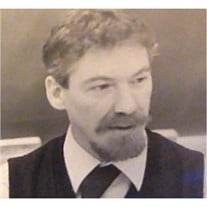 Paul E. LeBoeuf, 66, passed away June 17, 2016 at the Hope Hospice Palliative Care Center. Paul, son of the late Adrian and Rose (Cournoyer) LeBoeuf of Manville. He is also survived by his longtime partner, Carol M. Slattery of Providence. He leaves behind his sister Claire Centazzo and her husband David of Bristol, sister Suzanne Columbe of Ocala, Fla., brother Richard LeBoeuf and his daughter, Ashlee LeBoeuf, of Woonsocket, and brother Raymond LeBoeuf and his wife Paula of West Warwick.Paul graduated from Lasalle in 1965 and then received a Master of Arts degree from Rhode Island College in 1973. He spent the majority of his life as a language teacher in various countries, such as the Kingdom of Saudi Arabia, The United Arab Emirates, Kuwait and China. As a native French speaker, he easily adapted to languages around the world, teaching English as a second language. Paul also volunteered for the Peace Corps and spent time in Africa. His excitement for life was multinational and multicultural and he was full of stories to share about his travel experiences. His joie de vivre was infectious, carried him across continents and attracted others to him. In the United States he taught French at Universities and high schools in several States, most recently at Tolman High School in Pawtucket. He was an excellent teacher in the classroom, honored and respected by his students, who claim he made learning fun!When he retired from teaching, he showed compassion and caring as a direct support worker in group homes for the disabled. Paul was employed by Seven Hills in Woonsocket and the Cranston ARC.Paul™s professional colleagues and employers have said that his personal conduct and dedication to duty always maintained the highest standards and his integrity in serving was beyond approach.Visiting exotic countries, The Holy Lands, Bali, Egypt, India was his motivating passion. Stateside he was an avid sports enthusiast, with hockey at the top of his list. He was a talented gardener and spent much time tending his flowers and plants. Paul was always unique, and a bit of a maverick as he did things his way. He will be greatly missed by family and friends and the legends of life he taught us all.Calling hours will be held on Sunday, June 26th from 4 - 6:00 p.m. in the Winfield & Sons Funeral Home, Rt. 116, Scituate. A Mass of Christian burial will be held on Monday at 11:00 a.m. in St. James Church, Lincoln. In lieu of flowers donations in his memory may be made to a charity of your choice.

Paul E. LeBoeuf, 66, passed away June 17, 2016 at the Hope Hospice Palliative Care Center. Paul, son of the late Adrian and Rose (Cournoyer) LeBoeuf of Manville. He is also survived by his longtime partner, Carol M. Slattery of Providence. He... View Obituary & Service Information

The family of Paul E. Le Boeuf created this Life Tributes page to make it easy to share your memories.