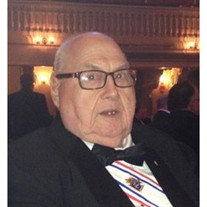 Paul Ernest Hackney, 80, of Foster, RI, beloved husband of the late Marianne (Waskiewicz) Hackney, died July 14th at Miriam Hospital after a short illness. Born in New Britain, the son of the late Francis and the late Rose (Veronesi) Hackney, he was employed by The City of New Britain Housing Authority. He was a member of the St Paul the Apostle Church in Foster, RI. He was veteran and a 4th degree Knight of Columbus in St Paul RI Council 95 and volunteered running the bake sale booth for the St Paul Church Christmas Bazaar.He is survived by one brother, Everett Hackney of Florida, three daughters and son-in-laws, Valerie and Robert Vujs, Berlin, CT, Sandra and Richard Grant, Berlin, CT, and Barbara and Terry Breslin with whom he lived in Foster, RI; a son and daughter-in-law, Paul E. Hackney Jr. and his wife Karen of West Greenwich, Rhode Island and several nieces and nephews. His greatest pride was in being a Poppy to his nine grandchildren, three great grandchildren and two German exchange student grandchildren.He enjoyed spending his time puttering around his yard, tending to a small flock of chickens, turkeys and pigs. He was an avid hunter and loved trips to the beach with his family. When not outdoors you might find him at Foxwoods Casino playing BINGO.He was predeceased by three brothers, Eugene Hackney, John Hackney and David Hackney; and his light and joy, Mitzi. Friends and relatives are invited to call at Winfield and Sons Funeral Home, 571 W Greenville Rd (Rte 116), North Scituate, RI on Friday July 22nd from 6pm 9pm. All are welcome to join us for a Mass of Christian Burial at St Paul the Apostle Catholic Church, 116 Danielson Pike, Foster, RI followed by a light luncheon on Saturday July 23rd at 10AM. In Lieu of Flowers we ask that donations be made in his name to a charity of the donors choice.

The family of Paul Ernest Hackney created this Life Tributes page to make it easy to share your memories.

Paul Ernest Hackney, 80, of Foster, RI, beloved husband of the...