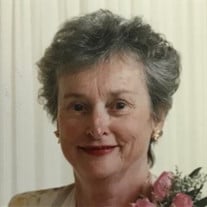 Maguire, Norma, M. (Senior), 87, passed away on June 10, 2020, at her home in Johnston. She was predeceased by her husband, Patrick J. Maguire, in 2001. Norma was born in Providence, the daughter of Norman W. Senior and Edna G. (Robertson) Senior. She attended the Veazie Street Elementary School and Esek Hopkins Junior High School. She graduated from Mt. Pleasant High School in January 1950 and worked briefly as a typist and messenger for Industrial Trust Company, distributing mail throughout the “Superman Building.” Norma then worked for New England Telephone Company for 13 years altogether, with a three year break from 1953-56 for an “adventure” in the US Army Signal Corps, as a teletype operator at Camp Darby, in Livorno, Italy. During her second stint with New England Telephone she attended a company ski trip to North Conway, NH, where she met Pat, at 5 p.m., on March 1, 1958, in the dinner line at the Oxen Yoke Inn and Motel. Soon, they had Rhode Island Reds season tickets at the old RI Auditorium, where she was lucky enough to catch a puck one night. They were married on June 17, 1961, and in February 1962 they bought a house in a little neighborhood next to some great neighbors and the Oak Swamp Reservoir, in Johnston, where they raised six children: Stephen P. Maguire, Esq. (Laura), of Cranston; Margaret A. Guilmette (Steven), of Johnston; Peter N. Maguire (Gail McCormick), of Johnston; Daniel E. Maguire, of Johnston; Amy N. Carvalho (Kevin), of Johnston; and Spencer A. Maguire, Esq. (Cari), of Belgrade, Serbia. Norma learned to swim at the Wanskuck Boys Club, and kept swimming into her 80s. She learned to play the piano and was a duck pin stalwart for decades at the Hearthside Bowling Lanes, in Smithfield, and Town Hall Lanes, in Johnston. She was treasurer for the Brown Avenue PTA for a while, and she excelled at every card game she learned, especially High-Low-Jack and Cribbage, and made sure all of her grandchildren could play. She was great cook, and a crafter of beautiful things -- meaningful handcrafted treasures including the cable knit afghans that she gave as wedding presents, knitted monogramed Christmas stockings for the many babies born into and around her life, counted cross-stich housewarming wall hangings, crocheted or macramé tablecloths and Christmas ornaments, quilts, sweaters, hats, mittens, and . . . . She could reupholster a comfy chair or cane a kitchen chair. At one time she could even make you stained glass window. She never lost her sense of adventure. In 1969 she and Pat put the four kids they had at the time into their 1963 Rambler station wagon and dragged a camping trailer to California and back, with stops in Kentucky and South Dakota. She continued to travel later in life, with visits to her sisters in California and Florida, and through participation in numerous Elderhostel programs. She enjoyed outings with the ladies of Red Hat Society, watching the Red Sox, the Bruins, and the Patriots. She was a wiz at Wheel Of Fortune and Jeopardy. She mastered several types of solitaire on her smartphone and tablet, and bested most who challenged her on Words With Friends. In addition to her six children and 10 grandchildren, Norma is survived by her three beloved sisters: Marion Patterson (Tom), of Corona, California; Jean Stephens (John), of Tarpon Springs, Florida; Joan Tramonti (Bernard), of Tarpon Springs, Florida; and countless nieces and nephews. A funeral service will be held Thursday June 18th at 10:00 a.m. in the Winfield & Sons Funeral Home, 571 West Greenville Road, Scituate. Burial with Military Honors will follow at Highland Memorial Park Cemetery. Calling hours Wednesday 5:30-8:00 p.m. (COVID-19 guidelines will be followed). In lieu of flowers donations in her memory may be made to Hope Hospice & Palliative Care of RI, 1085 North Main St., Providence, RI 02904.

Maguire, Norma, M. (Senior), 87, passed away on June 10, 2020, at her home in Johnston. She was predeceased by her husband, Patrick J. Maguire, in 2001. Norma was born in Providence, the daughter of Norman W. Senior and Edna G. (Robertson)... View Obituary & Service Information

The family of Norma M. Maguire created this Life Tributes page to make it easy to share your memories.