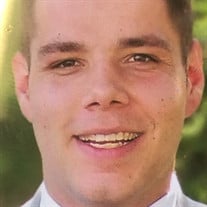 Nicholas M. Winfield, 26, of Scituate, passed away on September 2, 2018. He was the son of John F. Winfield, Jr. and Linda A. (Lanni) Winfield. He also leaves his brother, Jonathan Winfield. In addition, he leaves his grandmother Barbara A. (Hanley) Froempter, his uncle, James Lanni and his wife Shelley, of Johnston and several cousins. Nicholas was a graduate of Scituate High School. He also graduated with honors from the Community College of Rhode Island where he majored in Business. He was enrolled in, and scheduled to attend, the Pittsburgh Institute of Mortuary Science in October, 2018. He was employed as an intern as well as a certified crematory manager with the Winfield & Sons Funeral Home and Crematory. Prior to his college education he had been a Certified Nursing Assistant and been employed as a CNA specializing in Alzheimers/Dementia patients. He took great pride in providing care to these people in need. Nicholas had a lifelong love of animals, especially his dogs, Thor and Hailey. He also enjoyed rollercoasters and travelled throughout New England and the east coast as well as to Ohio to ride the best coasters that he could find. He was a loving individual who would be the first to help those in need. Anybody who knew Nicholas knew that he was quick witted with a dry sense of humor. What many people did not know was that he was also sensitive and soft-hearted. A Mass of Christian Burial will be held at 10:00 a.m. on Monday, September 10, 2018, at St. Joseph Church, Danielson Pike, Scituate. Entombment will follow at Swan Point Cemetery, Providence. Calling Hours Sunday, September 9, 2018, from 1:00 to 4:00 p.m. at the Winfield & Sons Funeral Home. In lieu of flowers donations in his memory may be made to the Friends of the Scituate Animal Shelter, P.O. Box 14, Clayville, RI 02815, fsasri.org Nick's Tribute video is now available for viewing on the Photos and Video page above.

Nicholas M. Winfield, 26, of Scituate, passed away on September 2, 2018. He was the son of John F. Winfield, Jr. and Linda A. (Lanni) Winfield. He also leaves his brother, Jonathan Winfield. In addition, he leaves his grandmother Barbara A.... View Obituary & Service Information

The family of Nicholas M. Winfield created this Life Tributes page to make it easy to share your memories.

Nicholas M. Winfield, 26, of Scituate, passed away on September...