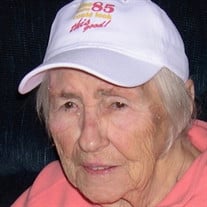 Nancy Ashline (Wolf), 87, passed away December 2, 2016 at home in North Kingstown, Rhode Island surrounded by her family. Predeceased by her parents Harvey (Dora) Wolf, her siblings, brother Richard Wolf, sister Jayne (Wolf) Merriweather. Nancy grew up in Hyannis Port, MA and as a child enjoyed summers at her grandparent™s in Lunenburg, Nova Scotia. After attending Barnstable High School, she enrolled in secretarial school and was later employed at Boston University. In 1977 she began working at Jordan Marsh in Warwick, RI before retiring in 1991.?In retirement, she enjoyed traveling the U.S and a tour of Europe with her late sister Jayne. Nancy enjoyed gardening, bird watching, crafts, cooking shows and music (especially The Boston Pops). She loved attending the Air Show each year, and always looked forward to the Tall Ships coming to town. She was also a Red Sox fan and enjoyed going to Fenway Park with her children. Her favorite place to return was always Lunenburg, and her children took turns taking her there for vacations later in life. Her daughter Meg served as her caregiver for over five years and thus, Nancy was able to pass peacefully at home. Dorothy Coutard, the patient and compassionate visiting nurse, took exceptional care of both Nancy and Meg, especially toward the end of Nancy™s life. Besides her daughter Meg, of Warwick, RI, Nancy is survived by her son, Peter and wife Nancy, of Boone, NC, a daughter Suzanne of Southbridge MA, four grandchildren, three great-grandchildren and many nieces and nephews. Services will be private.?For the exceptional care that was given, donation contributions can be made to the VNA of Care New England 51 Health Lane, Warwick Rhode Island 02886, [email protected] 401-574-4900

The family of Nancy Ashline created this Life Tributes page to make it easy to share your memories.