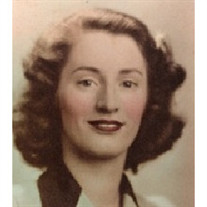 Mollie Cooley Decker (Hosbond) died peacefully on Friday, May 15, 2015 at the Apple/Clipper Home in Westerly. She was 96.She was born January 25, 1919 in Bronx, NY to Molly Ferguson and Harry Cooley, her only sibling was a brother, Mark, who died at the age of 6. Her father, Harry, died in his thirties from tuberculosis.A WWII veteran, she met her first husband, Harold Hosbond in the Navy. They had two sons, Martin and Carl. Her second husband, Malcolm Decker died in 2008 at the age of 90.She worked most of her life after discharge from the Navy; at Triangle Prints (her husband, Malcolm™s business) and later in life as the Town of Charlestown™s Fire Tax Collector. She was an active member of the Rhode Island PTA, serving as President as well as a member of the Danish Sisterhood. An avid sports fan, she was loyal to the Boston Red Sox and the New England Patriots.She is survived by her two sons and their wives, Martin and Becky (Iowa) and Carl and Kathy (Rhode Island). Her seven grandchildren and eight great grandchildren are: Jeff and Karie Hosbond and their daughter, Ashlynn; Krissie and Christopher Donahue and their sons, Gavin and Noah; Kevin and Alicia Hosbond and their son, Simon; Ariana Hosbond and her children, Alexander, Deaven Lee, Jacob and Robert; Piper and Marcus Jackson, Timothy Hosbond (son of Carl) and Martin, son of Martin and Becky.In lieu of flowers, the family would appreciate donations to the Charlestown Animal Shelter at 4540 South County Trail, Charlestown RI 02813. A Life Remembrance will be held on Thursday, June 11, 2015 at Pancho O™Malley™s in Narragansett from 5 pm to 8 pm. www.oovoo.com attendees are welcome. Burial will be at the Rhode Island Veteran™s Cemetery Friday, June 12, 2015 at 11 am, if you plan to attend please organize at the administration building parking lot of the RI Veteran™s Cemetery at 10:45am.

Mollie Cooley Decker (Hosbond) died peacefully on Friday, May 15, 2015 at the Apple/Clipper Home in Westerly. She was 96.She was born January 25, 1919 in Bronx, NY to Molly Ferguson and Harry Cooley, her only sibling was a brother, Mark, who... View Obituary & Service Information

The family of Mollie Cooley Decker created this Life Tributes page to make it easy to share your memories.