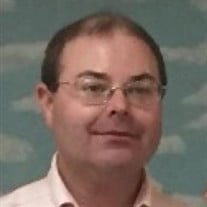 Michael Patrick Dennehy, 44, a lifelong resident of Johnston RI., passed on April 9th after a long battle with Cancer. Michael graduated from Johnston Senior High School in 1995 and went on to earn a degree in Criminal Justice from CCRI, a BA in Criminal Justice from Rhode Island College, and a BA in Digital Media Production from New England Institute of Technology. Michael also earned the rank of Eagle Scout with Troop 20 Johnston, Boy Scouts of America, and was a member of the Johnston Police Explorers. Michael spent many hours behind the camera, photographing numerous family events, scout events, airshows, and walks in the woods with his Dad. He loved bike riding with his Dad on numerous Rhode Island bike trails. He was also instrumental in the production of the history of the Rose Island Lighthouse for PBS. Michael’s love for his family was only superseded by his love for all things Disney. His numerous trips to Disney World, Epcot, Animal Kingdom, Hollywood Studios and Disney Cruises with his family will leave many happy memories for all. Michael was employed by Rhode Island Bureau of Investigation,(RIBI), managing the Warwick campus of New England Institute of Technology. Michael is survived by his parents, Donald and Sandra Dennehy of Johnston, brother Donald Dennehy Jr and his wife Alison of North Kingstown, RI, and sister Susan and her husband Matthew DeAthos of Johnston, RI. He will also be missed by his nephews Sean Dennehy, Aidan and Jamison DeAthos, who were all constantly spoiled by Michael. Visiting hours will be April 20 from 5:00 pm to 8:00 pm at Winfield & Sons Funeral Home, 571 West Greenville Road, Scituate RI. A Mass of Christian Burial will be held April 21 at St. Joseph Church, 144 Danielson Pike, North Scituate, RI at 10:00 a.m. followed by internment at Highland Memorial Park Cemetery, 1 Rhode Island Ave., Johnston RI. In lieu of flowers, please consider making a donation in memory of Michael to Friends of Scouting, Johnston-Troop 20, c/o Susan DeAthos, 6 Cedar Grove Ct, Johnston, RI 02919.

Michael Patrick Dennehy, 44, a lifelong resident of Johnston RI., passed on April 9th after a long battle with Cancer. Michael graduated from Johnston Senior High School in 1995 and went on to earn a degree in Criminal Justice from CCRI, a... View Obituary & Service Information

The family of Michael Patrick Dennehy created this Life Tributes page to make it easy to share your memories.