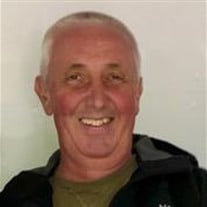 Matthew Thomson, of Glocester, RI passed away at home at the age of 52 on November 27th, 2019. Mat was born in London, England on January 26th, 1967 to the late William Thomson of Glasgow, Scotland and Lorna Wight Ferguson of Strachur, Scotland. He is survived by his wife, Carla, of 24 years, and his three children, Cameron, Meghan, and Cassie Jean. He also leaves his brother, Steve Ferguson of Olpe, Germany, his mother and father in-law Richard and Claudette Hohlmaier, and his in-laws Rocco and Karen Pezza, Stephen and Laura Petrozzi, Alan and Claudia Gandelman, Daniel and Pamela Fagan, Joseph and Jennifer Pezza and his very much loved nieces and nephews, Samantha, Justin, Sabrina, Stephen, Sean, Nicholas, Jared, Jenna, Aly, Shane and Joseph III. Mat grew up in Scotland (mostly) and England. In his late teens he traveled extensively and lived in Majorca, Spain before moving to the United States and settling in Glocester, Rhode Island where he was a resident for twenty-five years. He worked for the RI Zoological Society at Roger Williams Park Zoo. Mat loved his zoo family, including all the animals. Mat loved music and fancied himself an expert critic of his daughter's performances; he loved making people laugh, especially when it was at one of his immature or wildly inappropriate jokes. His sense of humor was so wonderful he was equally content to tell jokes as he was to be the butt of them. Mat loved all sports, adopting the New England Patriots and Boston Bruins when moving to America. Closest to his heart was soccer which he played until his ankles refused to. He remained an avid fan - coaching, watching, and pacing the sidelines at his son’s games. Mat loved telling stories which he embellished without conscience, and loved throwing a good party which always included a bonfire that left the garage bereft of gasoline. Visitation Friday December 6th from 10:00 a.m -12:00 noon followed by a Memorial Service at 12:00 noon in the Winfield & Sons Funeral Home, 571 West Greenville Road, Scituate. In lieu of flowers, memorial contributions may be made to the RI Zoological Society, 1000 Elmwood Avenue, Providence, RI 02907.

Matthew Thomson, of Glocester, RI passed away at home at the age of 52 on November 27th, 2019. Mat was born in London, England on January 26th, 1967 to the late William Thomson of Glasgow, Scotland and Lorna Wight Ferguson of Strachur, Scotland.... View Obituary & Service Information

The family of Matthew Thomson created this Life Tributes page to make it easy to share your memories.

Matthew Thomson, of Glocester, RI passed away at home at the...