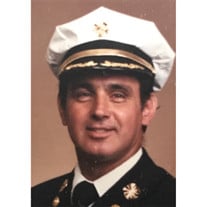 Marcel Gerard Comire, beloved husband of Claire (Isabelle) Comire, passed away at his home in Cumberland on Saturday, September 9th, 2017 after a courageous battle with cancer. He was surrounded by his loving family. Marcel was born on June 12, 1942 in Woonsocket, RI. He was a lifelong resident of Manville, RI before retiring to Florida in 2002. He was the son of the late Donat Comire and Claire (Dupont) Comire of Manville. He was the brother of Paul Comire of South Carolina and the late Margaret (Comire) Ayotte and the late Viola (Comire) Griffin. He is survived by his children, Troy M. G. Comire and his wife, Kim (Gagne) Comire, of Manville, Patty (Comire) Mueller and her husband, Jeffrey Mueller, of Cumberland, Cindy (Comire) Croteau and her husband, Joseph Croteau, of North Smithfield and Krissy (Comire) Delgado of Cumberland. Marcel was the adored Pepere of his grandchildren Amanda, Joey, Butchie, Heidi, Amanda, Julie, Jake and Ethan and his great grandchildren Amelia, Henry, Annie and Addison. Marcel worked as a barber in his father's shop in Woonsocket before becoming a professional builder/contractor of custom homes. He dedicated his life to the fire service, volunteering as a firefighter for the Manville Fire Department as a young man. Many people came to admire and respect him as the Fire Chief of the Manville Fire Department and the Albion Fire Department, both of Lincoln, RI. The family would like to thank all the family and friends for their unwavering support throughout Marcel's illness. They would also like to express their gratitude to Dr. Howard P. Safran and nurses, Lynn Shaw and Jennifer Renaud, of the Cancer Center of Rhode Island for their guiding hands and tender treatment of our beloved. Calling hours Saturday, September 16 th at St. James Parish, Manville, RI from 9:00 a.m. to 11:00 a.m. immediately followed by a memorial mass. All are invited for refreshments following the service. In lieu of flowers, donations can be made to the St. Jude Children's Research Hospital.

Marcel Gerard Comire, beloved husband of Claire (Isabelle) Comire, passed away at his home in Cumberland on Saturday, September 9th, 2017 after a courageous battle with cancer. He was surrounded by his loving family. Marcel was born on June... View Obituary & Service Information

The family of Marcel Gerard Comire created this Life Tributes page to make it easy to share your memories.