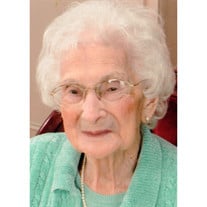 Madeline M. Bache, formerly of North Scituate, Rhode Island passed away in Shelbyville, KY on August 20, 2017 at 105 years and 8 months young. Born December 5, 1911 in Providence, Rhode Island, she was the daughter of the late Eugene J. and Malvina LeBlanc Boucher. Madeline was predeceased by her three sisters, Evelyn Moffat, Evangeline Lacross and Genevieve Boucher. Madeline married her late husband, Frederick C. Bache in Providence in 1935 and had been married 63 years when he passed away in 1999. They raised their family of four children in North Scituate, RI. For many years, they ran a family business, The Hayseed, a general country store on Chopmist Hill Road in Scituate. Madeline went on to a career as secretary at North Scituate Elementary School, serving for many years and relating to both children and parents as only a mother and grandmother can. They lived in Scituate Village and were active in the community with PTA, Lions Club, and of course, supporting Boy Scouts, Campfire Girls, 4-H, sports, dance lessons and recitals and other activities of their children. In her later years, she lived at Rockland Oaks Senior Housing and enjoyed many good times at the Scituate Senior Center. In 2015 she moved to Shelbyville, Kentucky to be closer to her oldest daughter, Barbara, and family, making new friends at Crescent Place Assisted Living. She is survived by her children; Dennis Bache of Moretown, VT; Barbara and husband Peter Plummer; Gary Bache of Coventry, RI and longtime friend of the family, Karen Johnson of South Kingstown RI; and Linda Thomas of Wilmington, NC; eight grandchildren; Jeffrey Plummer and Jennifer Hay of Kentucky; Christina Bache of Tampa, FL; Michael and wife Sarah Bache of Fair Haven, VT; Sarah and husband Kevin Avery of Berlin, VT; Judith and husband Dave Schantz of Starksboro, VT; Andrew Bache of San Diego CA; and Kerri and husband George Brennan of Cape Coral, FL; nine great-grandchildren, Nicholas Brennan, Ashley Hay, Eric Hay, Heather Plummer, Bethany Plummer Scott, Gabriel and Ian Bache, Orrin and Austin Avery and one great-great grandchild, Lillian (Hay) Thompson. Her grandson Kevin Bache, son of Gary, passed away in 1985. Madeline was an inspiration to all who knew her, taking on a new zest for life and new adventures while in her nineties. She embraced a series of adventures, including flying in a WWII fighter plane, a glider, hot air balloon, and a helicopter; riding a snow grooming machine in VT, a gondola in Providence, taking the helm of a 12-meter yacht, and traveling with her children to the Grand Canyon, Washington DC and the Bahamas. Her spirit and positive attitude expressed itself in her love of dancing, even with her walker, and her famous backrubs given to her senior friends. She was always ready to go and try something new, with her trademark phrase Why not? She was honored as Scituate™s oldest citizen and attended the RI Governor™s Senior Luncheon for centenarians for several years. Throughout her life she loved to do crossword puzzles and play cards and games, and she created some amazing pieces of needlework art, hooked rugs and cross-stitch projects which have been passed along to family and friends to treasure. She also presided as The Queen over family reunions in 2003, 2010 and 2014 and at her 100th birthday celebration in 2011. A Funeral Service will be conducted on Tuesday August 29 in the Winfield & Sons Funeral Home, 571 West Greenville Rd., North Scituate, RI. at 10:30 a.m. Burial will be at Highland Memorial Park in Johnston, RI. The family will receive friends on Monday August 28 from 5-8:00 p.m. at the funeral home. In lieu of flowers, memorial donations may be made in Madeline's honor to the Scituate Senior Center, 1315 Chopmist Hill Rd, N. Scituate, RI 02857, or to Hosparus (Hospice) in Kentucky, 3532 Ephraim McDowell Drive, Louisville, KY 40205.

Madeline M. Bache, formerly of North Scituate, Rhode Island passed away in Shelbyville, KY on August 20, 2017 at 105 years and 8 months young. Born December 5, 1911 in Providence, Rhode Island, she was the daughter of the late Eugene J. and... View Obituary & Service Information

The family of Madeline M. Bache created this Life Tributes page to make it easy to share your memories.