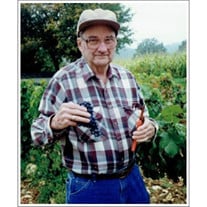 MARSHALL L. SPAULDING, 91, died on May 7, 2015 in Foster, RI. He was beloved husband to his wife of 69 yrs Dorothy May (Young) Spaulding. He was born in Danielson, CT on October 21, 1923 and was the eldest son of the late Jacob and Francis (Upham) Spaulding. He is survived by his children Myron L. Spaulding and wife Linda, Malcolm L. Spaulding and wife Nicole, and his sister Louise Berry. His daughter, Marilyn L. Spaulding predeceased him.He was employed as a Production Controller at the US Naval Air Station, Quonset Point, RI from 1947 until it™s closing in 1972 and then by the RI Department of Transportation until his retirement in 1989 He graduated from East Killingly High School, Danielson, Connecticut in 1941 and received a federal aircraft license from the Ellis Technical School in 1945. He served in the US Navy and the Connecticut State Guard.Mr. Spaulding was a 50 yr member of the North Foster Baptist Church serving as treasurer, historian, and chairman of the deaconate. He was a life-long member of Hamilton Lodge of the Masons (No. 15), North Scituate; a member of the Ponaganset Grange- Sword of Bunker Hill, Gaspee Order No 9; a life member of the South Foster Fire Department, and a member of AARP and the National Association of Retired Federal Employees.He developed a passion for genealogy research late in life and spent many happy years researching various branches of the family and members of his church.Friends and relatives are invited to attend visiting hours and the funeral services at the North Foster Baptist Church, Foster, RI at 11:00 AM on May 16, 2015 with burial services at the adjacent Hopkins-Stone cemetery immediately after the church service.In lieu of flowers, contributions may be made in his memory to the North Foster Baptist Church, 81 East Killingly Road, Foster, RI 02825 or the Foster Preservation Society, 180 Howard Hill Road, Foster, RI 02879. The photo was taken of Marshall during the vintage in the village of Estivals, France at a private vineyard owned by Louis Muzac on October 9, 1996.

MARSHALL L. SPAULDING, 91, died on May 7, 2015 in Foster, RI. He was beloved husband to his wife of 69 yrs Dorothy May (Young) Spaulding. He was born in Danielson, CT on October 21, 1923 and was the eldest son of the late Jacob and Francis (Upham)... View Obituary & Service Information

The family of MARSHALL L. SPAULDING created this Life Tributes page to make it easy to share your memories.