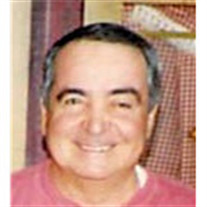 Notorantonio, Louis E., 77 of Hartford Pike, North Scituate died peacefully at home surrounded by his family. He was the husband of Janice A. ( Demarais ) Notorantonio.Born in Providence he was the son of the late Edward and Jessica ( Colaluca... View Obituary & Service Information

The family of Louis E. Notorantonio created this Life Tributes page to make it easy to share your memories.