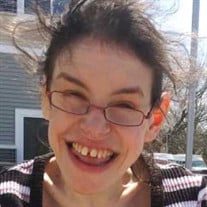 LaPlante, Kimberly M., 45, former longtime resident of North Providence, and recent resident of Pawtucket, RI, passed away Tuesday, July 20th. She was the daughter of the late Robert J. A. LaPlante, and Mary A. LaPlante (Harkness), the sister of Stephanie Harrison (LaPlante) and she was the awesome niece and buddy to the family of her Uncle Christopher Harkness, Aunt Michelle and cousins, Alexandra, Thomas, Samantha, and Daniela. She was loved by all who were blessed to have known her, leaving many aunts, uncles and cousins behind. Kim was diagnosed early with a chromosome disorder impacting her mental capacity, but despite the dire outlook, she lived happily with her parents and sister. Her father passed away unexpectedly in 1984 while Kim was just 7 years old. Still Kim continued to live at home even while her mom suffered through MS. Reluctantly, at the age of 30, when her mom’s struggles with MS could no longer afford Kim the attention she needed and deserved, Kim found a new home. In 2006, she was fortunate enough to move in with the ARC of Blackstone Valley where she forged a new “family” under their care, guidance, and support. With her roommate Jan and housemate Barbara (and a supporting cast of others) she lived a loving and carefree life until she decided she had had enough silliness and wanted to see her Mom, Dad and grandparents whom adored her. Kim smiled her way through the toughest of times, with a big heart and a loving grin. If you were fortunate enough to be a “coo-coo, guy-guy” (gender irrelevant) or have been told “you’re so funny,” you had achieved the highest honor in her eyes. You were truly part of her inner circle if she ever told you to “shut up”. Her welcoming grin, fake cry, sarcastic laugh and unconditional love will be greatly missed. There will be no wake or funeral, but a private graveside memorial will be held in late August to celebrate her short but happy life. Donations may be made to the ARC of Blackstone Valley in her memory: https://www.bvcriarc.org/how-to-help/donate.html

LaPlante, Kimberly M., 45, former longtime resident of North Providence, and recent resident of Pawtucket, RI, passed away Tuesday, July 20th. She was the daughter of the late Robert J. A. LaPlante, and Mary A. LaPlante (Harkness), the sister... View Obituary & Service Information

The family of Kimberly M. LaPlante created this Life Tributes page to make it easy to share your memories.