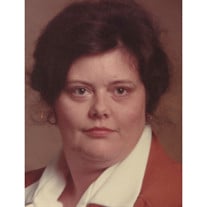 Taylor, Kathleen Francis died, Saturday, December 17th, 2016 of cardiac arrest at Roger Williams Emergency Room, in Providence. Kathy was 71 years old. She was a resident of the City of Providence for almost 50 years, having grown up in Johnston, R.I.Kathy is survived by: her husband, Frederick R. Taylor Sr. of Providence; two children, Susan L. Taylor of Boynton Beach, FL; Rick (Frederick) Taylor of Rehoboth, MA; a daughter-in-law, Diane; Susan™s partner B.; and two grandchildren Will and Luke Taylor. She is also survived by three sisters, Elaine, Madeline and Debbie as well as many nieces and nephews. She is predeceased by her sister, Ruth (Maher) Devito and her brother, Francis Maher Jr.Kathy worked as a Medical Secretary for over 20 years at the Garden City Treatment Center. In her retirement she worked as a tax return preparer for AARP and volunteered at the Trinity Episcopalian Thrift Store, in Scituate, RI. She was an avid reader and hobbyist. Kathy was a loving mother and wife, a devoted grandmother, a sympathetic ear to those who needed a friend, a giver of kindness to any stranger she met. She was unselfish in that rare and uncommon way, a way we don™t come upon very often. She touched many lives in her days. She understood the human spirit, and human frailty well. She accepted you for who you were and asked you to do the same.And while the passing of this kind and decent woman bears heavily on our hearts, we share in the knowledge that she loved us unconditionally. It was her greatest gift to her family and friends.Relatives and friends are invited to calling hours from 10:00 a.m. to 12:00 p.m., on Wednesday, December 21st, followed by a memorial service at 12:00 noon in the Winfield & Sons Funeral Home, 571 West Greenville Road, North Scituate, RI. Burial will be in Highland Memorial Park Cemetery, 1 Rhode Island Ave., Johnston, RI. In lieu of flowers, donations may be made to the American Heart Association.

Taylor, Kathleen Francis died, Saturday, December 17th, 2016 of cardiac arrest at Roger Williams Emergency Room, in Providence. Kathy was 71 years old. She was a resident of the City of Providence for almost 50 years, having grown up in Johnston,... View Obituary & Service Information

The family of Kathleen F. Taylor created this Life Tributes page to make it easy to share your memories.