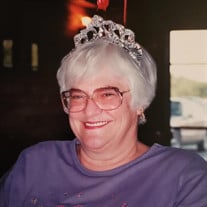 Joyce Cary Hopkins, 84, passed away peacefully on Friday June 25, with her beloved husband of 64 years, Robert M. Hopkins, by her side. She is predeceased by her parents, Luther F. Cary and Daisy (Darling) Cary, as well as by her much-loved brother, Luther F. Cary, Jr. Born in Providence on May 1, 1937, Joyce moved to Scituate as a girl, where she met and married the love of her life, Bob. After marrying on January 26, 1957, they moved to Foster, where they raised their family, before enjoying 30 years in Harlingen, Texas, surrounded by friends. She spent her working years in finance, making many friends along the way, in her jobs at Fleet and Lockheed-Martin. Joyce enjoyed many creative hobbies, including scrapbooking, crocheting, knitting, cake decorating, and had a passion for sewing, for which she won many awards over the years. She and her husband enjoyed countless “themed” parties with their friends, and together they traveled all over North America (collecting magnets and mugs along the way!). As well as being very active in 4-H, Joyce was also involved with the Foster Ambulance Corp., the Shriners Ladies Club, the Volkswagen Club, and numerous bowling leagues. She got involved with local government wherever she lived, from being on the Town Council in Foster, RI to being in the Chamber of Commerce in Harlingen, TX. She believed in volunteering, and frequently had a cause to champion. Joyce was a force to be reckoned with, and none knew that better than those she leaves behind: her husband, Robert; her daughter, Marcia Walker, and her husband Robert of Foxboro, MA; her son, Glenn Hopkins of Spokane, WA; her son, Todd Hopkins and his wife Laurie of Vancouver, WA; her 9 grandchildren, and their respective spouses; and her great-grandson, Archer. Her memory lives on now in their hearts, and she will be greatly missed. Calling hours will be held in the Winfield & Sons Funeral Home, 571 West Greenville Road, Scituate on Tuesday, June 29, from 10:00 - 11:00 a.m. with a Funeral Service to follow at 11:00 a.m. In lieu of flowers, and with the hope that one day no one will have to battle as she did with Alzheimer’s Disease, the family respectfully invites you to make donations in Joyce’s memory to the Alzheimer’s Association.

Joyce Cary Hopkins, 84, passed away peacefully on Friday June 25, with her beloved husband of 64 years, Robert M. Hopkins, by her side. She is predeceased by her parents, Luther F. Cary and Daisy (Darling) Cary, as well as by her much-loved... View Obituary & Service Information

The family of Joyce Cary Hopkins created this Life Tributes page to make it easy to share your memories.