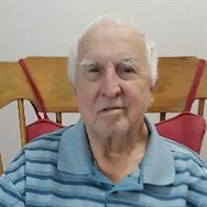 Joseph C. Peltier, 87, of Riverview Healthcare, Coventry, formerly of East Greenwich, died peacefully on Good Friday, April 10, 2020. He was born in West Warwick on September 2, 1932, the third of six sons born to the late Armand and Blanche (Gagne) Peltier. He attended West Warwick schools and was a graduate of West Warwick High School, Class of 1950. He was a proud veteran who honorably served in the Air Force during the Korean War. He worked as a produce manager for many markets including A & P, Star Market and Almacs. On October 12, 1961, he married the love of his life Jeanne Archambault. They settled in Coventry and raised two daughters together. They were married for 30 years before Jeanne’s death in 1992. His entire life was dedicated to enjoying the simple things in life and spending quality time with family. He had a sense of humor that never diminished. He was a lifelong Red Sox and Patriots fan. He is survived by his daughters, Julie Good of Riverside and Monique Daley and her husband Brian of East Greenwich and his four grandchildren, Matthew Good and his wife Carrie, and Andrew, Micaela and Caroline Daley, two brothers, Gerard Peltier of Coventry and Laurent Peltier of Jamestown and many nieces and nephews. He was predeceased by his brothers Lionel, Normand and Maurice Peltier. In lieu of flowers, donations to the Korean War Veterans Memorial Foundation, 950 North Washington Street, Suite 311, Alexandria, VA 22314 in Joe’s memory would be appreciated. A celebration of his life will be held at a later date due to the COVID 19 crisis.

The family of Joseph C. Peltier created this Life Tributes page to make it easy to share your memories.