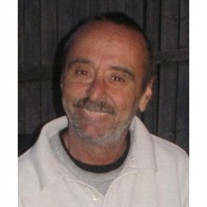 John Donald Sawyer passed away on Saturday, January 6th of natural causes. Born in Woonsocket, Rhode Island, John lived at the time of his passing in Burrilville, Rhode Island, where he had grown up. Throughout his life, John also lived in West Warwick, Rhode Island, North Carolina, and Kansas with his beloved children and grandchildren.Born on June 2nd, 1961 the son of Ernest Sawyer and Estelle (Marceau) Sawyer, brother of Dennis, Peter (Sharon), the late Jeffrey (Donna), and Lucien (Linda) Sawyer, John is predeceased by his parents. He is survived by his beloved daughter, Amanda Sawyer (Jason), his son, SGT. Justin Sawyer (Stephanie), and Lisa (LaPlante) Games, who he proudly considered a daughter. He also leaves behind grandsons Joseph Sawyer, Ryan Fontes, John Fontes, and Jacob Sawyer, and granddaughter Irelyn Sawyer; as well as former wife and friend Christine (Davis) Sawyer and her daughter Angelique Aponte, who was like family to John. He is also survived by his two nieces and two nephews.After working as a compassionate and dedicated CNA in various medical settings, John worked for Bruin Corporation as an installer for many years. He always took pride in his work. There are no words to express the loss John's family feels at his passing. He touched many lives in his time on earth, and would have given the shirt off his back to help anyone in need. He was an incredible and devoted father and grandfather whose family was his pride and joy. John enjoyed the simple things in life. John's life embodied the saying "It's not the years in your life that matter, but the life in your years." He was an active and devoted member of The Church of Jesus Christ of Latter Day Saints. The church was an incredibly important part of John's life.A special thanks from John's family to Frank Hopkins and the late Pat Blicker of Harrisville, Rhode Island. Their friendship had a special place in John's heart. A special thanks also to John's local Church of Jesus Christ of Latter Day Saints, whose members have been there for John and his family in their most difficult times.Calling hours will take place on Wednesday, January 17th at 4:00 to 7:00 p.m at Winfield & Sons Funeral Home in North Scituate, Rhode Island, with funeral service to follow at 7:00 p.m. All are welcome to join John's family in celebrating his life.

John Donald Sawyer passed away on Saturday, January 6th of natural causes. Born in Woonsocket, Rhode Island, John lived at the time of his passing in Burrilville, Rhode Island, where he had grown up. Throughout his life, John also lived in... View Obituary & Service Information

The family of John Donald Sawyer created this Life Tributes page to make it easy to share your memories.