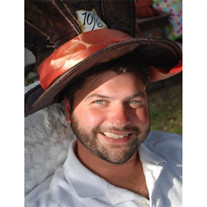 Jared Neil Bromley, age 32, died on Wednesday, March 8th, 2017 unexpectedly in his sleep. Born in Providence on November 28th, 1984, he was the adored son of Neil Richard and Elizabeth Bromley and his loving mother, JoAnn (Vinagro) Bromley, the lifetime buddy of his sister Jocelyn Bromley, and a beloved spirit to all friends and family. His childhood was split between his hometown of Buttonwoods - streets he constantly pounded throughout his life and his grandparents farm in Johnston. He grew up in a house filled with music, play, laughter, and Christmas traditions. He looked forward to holiday themed crafts and activities his mother would plan, including his favorite Halloween costume; a handmade Fozzy Bear suit he asked her to make when he was 27, which he promptly wore out. His father and he shared bonding camp outs together in the woods and took spontaneous 1:00 a.m. road trips to the Kancamagus Highway and back many a Sunday morning. He, along with his sister made up JBroms-squared, an unbeatable team in beer pong and who together would sing out lyrics at the top of their lungs to their favorite childhood band XTC. He admired his Grandma V., whose strength and frankness he emulated himself.Jared was a graduate of Warwick Vets High School, class of 2002. He worked with City Year after graduation for two years. He was a proud glazer in District Local 1333, who prided himself on his smooth caulking work. He lived for playing hockey, both on his rollerblades and ice skates. He lived out his boyhood fantasy of driving the Zamboni, always ready to volunteer at a charity event. He was excited to host his Fezziwig ugly sweater skating parties for his friends and family. He participated in the New Year™s Day penguin plunges for years. He studied sharks and dreamed of swimming with them, working on saving their lives. He loved to laugh - full on belly laughs, even at his bad jokes. George Carlin, Fozzy Bear, Einstein, The Dude, and all of his family were his heroes. He lived for the freedom of the road with his pup Pawkas as his navigator. He™d love to explore the hidden depths throughout New England in daring ways with his cherished friends, who made up his extended family. He enjoyed sleeping overnight on benches in Newport and on various beaches. He loved to be on the water in a boat, on his way to Block Island. He was so proud after he saved his younger second cousin from treacherous currents in a lake. He looked forward to cousin game nights (I thought the nuts were free!).Jared was a dancing machine and the life of any get together or party. He took any restriction that came at him and found a way around them because nothing was going to stop him from being where he wanted to be, doing what he wanted to do. He was extremely creative, building a huge wooden bench with just a saw and a nail gun. A bench so big that a full grown adult™s feet would hang off of it with the intent that you would feel like a child while sitting in it. He did the same with igloos made of snow that could easily house a four player card game and of which you could stand up in talk about a man cave! He revelled in treating everyone to drinks at his favorite hangouts, just like his Papa taught him by example. He enjoyed sneezing because he felt that they were orgasms for your face. He was hysterical - oh boy, was he ever! He loved fires and like them, he burned like a roman candle into the sky.Jared, with the brightest and biggest smile in the room, touched everyone he met and left an incomparable mark on their heart, many who share with us that they considered him their best friend and brother due to his great love and dedicated heart. He woke up every morning, excited about the possibly of the day ahead but on March 8th, Papa™s birthday¦..ahhh, what the foz Jare - you left us all too soon. Wocka, wocka forever and ever. Memba? We certainly will! Viewing will be held Sunday March 12th 2 p.m. 5 p.m. at Winfield & Sons Funeral Home at 571 West Greenville Road in North Scituate, RI 02857. In lieu of flowers, donations can be made in his name to savethebay.org. Celebrate with us the life of Jared by wearing bright colors and sharing your fondest, funniest, and wildest memories.

The family of Jared Neil Bromley created this Life Tributes page to make it easy to share your memories.