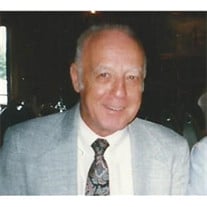 James Normand Manton Sr., of 185 Stoney Hill Road, passed away on Sunday, February 15th at Massachusetts General Hospital, in Boston, Ma.He was the beloved husband of Muriel Georgianna (Carignan) Manton and is survived by his sister Yvonne Ferreira of Tiverton, RI.Born on November 7th, 1935, He was the son of the late James Patrick and Yvonne Edwidge (Menard) Manton.After graduating from Joseph Case High School in Swansea Massachusetts in 1953, Jim served his country proudly in the United States Air Force. After his service, he returned to Swansea and received a Bachelor™s Degree in Electrical Engineering from Bradford Durfee College of Technology in Fall River Ma. in 1962.Jim was employed at the Naval Undersea Warfare Center in Newport, RI for over 35 year.Jim was an active member of the Friends of the Cardinals and of the Knights of Columbus, Council 3669, for over 20 years. He was also a member of the St. Dominic™s Federal Credit Union, where he served as President until the time of his death. He was also very involved in the St. Dominic™s Church, where he not only was a parishioner but volunteered his time for many activities and committees, including as a founding member of the Men™s Club.Jim enjoyed traveling with his wife Muriel as well as spending time with his grandchildren and great grandchild. He spent many hours volunteering his time in his various organizations, including keeping minutes for the Knights of Columbus, doing the shopping and setting up for concessions at Case High Sporting events and, in earlier years umpiring in the Swansea Little League.Jim leaves behind 4 loving and devoted children: James N. Manton Jr. and his wife Cynthia of Swansea, Ma: Susan C. Patota and her husband Peter of Swansea, Ma: Brian S. Manton and his wife Elizabeth of Swansea Ma and Kristin L. VanLuinen of Warwick, RI. James is also the grandfather of 10 and great-grandfather of 1, with another on the way.A funeral mass in celebration of James™ life will be held on Saturday, February 28th at St. Dominic™s Church at 1277 GAR Highway (Route 6), Swansea, MA at 11:00 AM. The Manton family will greet relatives and friends at the Waring Sullivan Funeral Home at 189 Gardner™s Neck Road, Swansea, Ma on Friday February 27th from 4-7.In lieu of flowers, donations may be made in Jim™s name to the American Diabetes Association, P.O. Box 11454 Alexandria, VA 22312, 1-800-DIABETES 1-800-342-2383), or http://diabetes.org/

The family of James Normand Manton, Sr. created this Life Tributes page to make it easy to share your memories.