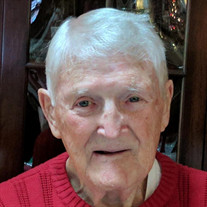 Chaplow, James T. “Chappy”, 96, passed away on Wednesday, November 11, 2020. He is preceded in death by his wife, Olive Viola Frick; sisters: Theresa Lancaster and Anita Chaplow, and brother: John Chaplow. He is survived by his four loving daughters: Sandra McCann and husband, William, of Radford, VA; Debra Lippe and husband, Raymond, of Mexico, ME; Rhonda Pilozzi and husband, Robert, of The Villages, FL; and Cynthia Bisordi and husband, Robert, of Ruffin, NC; his sister, Constance Bloomer, of North Providence, RI; ten grandchildren, six great grandchildren, and several nieces and nephews. Chappy was born in Norwich, CT on January 20, 1924. He served in the U.S. Army/Air Force during World War II as a proud member of the “Mighty 8th”. He attained the rank of E-5 Sargent and was part of the “occupying force” in Germany at the end of the war. Chappy retired from the Hindley Manufacturing Company in Cumberland, RI where, in his younger years, he was a passionate member of their softball team. Additionally, he cheered on his beloved Detroit Tigers in good and bad years always being supportive. Later in life, beginning when he was 92 years old, he found much delight in working with the “Vittles for Vets” food charity serving veterans in need. He was an inspiration to all who had the privilege of meeting him through the many functions and fund raising events he attended involving the charity, from bingo to county fairs to motorcycle runs to New Years Eve parties and much more. He was beloved by all in his new community of Pulaski County and Radford, VA. After a short illness Chappy passed away peacefully. We ask that you not mourn his passing but celebrate his life as he lived it to the fullest always surrounded by the love of his family. It is comforting that he served to protect his country during WWII, volunteered to help veterans, and was lifted to meet his maker and reunite with his wife on Veterans Day. In lieu of flowers a donation to the “Vittles for Vets” food card program would be greatly appreciated. Donations can be made payable and sent to: Vittles for Vets, 7757 Walker Farms Drive, Radford, VA 24141. Calling hours will be held Monday, November 23, 2020 from 9:00 a.m. to 10:00 a.m., followed by a funeral service in the Winfield & Sons Funeral Home, 571 West Greenville Road, Scituate, RI. at 10:00 a.m. Burial will be private. COVID Precautions will be in effect. Face masks are required and social distancing will be observed.

Chaplow, James T. &#8220;Chappy&#8221;, 96, passed away on Wednesday, November 11, 2020. He is preceded in death by his wife, Olive Viola Frick; sisters: Theresa Lancaster and Anita Chaplow, and brother: John Chaplow. He is survived by his... View Obituary & Service Information

The family of James Thomas Chaplow created this Life Tributes page to make it easy to share your memories.