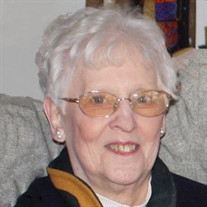 Irene Rose Sperry (nee Paquin) was born December 26, 1929, in Providence, RI. Daughter of Henri and Blanche Paquin, she was the fifth of nine children. She grew up in a Providence French Canadian neighborhood where, both at school and at home, French and English were used interchangeably. Educated at Catholic schools, she was the only one of the nine siblings to graduate from high school. Irene’s first job was at a soda fountain, a position she attained by lying about her age and, one can easily assume, looking extremely cute. Throughout her life she worked as a bookkeeper, a stay-at-home mom, a teller at the Scituate Credit Union, salesperson at Stowells’ Jewelry, and as a medical secretary at RI hospital. In 1951 she married Edwin Sperry. After a honeymoon drive to Nebraska to visit a friend of Ed’s from the Second World War, they moved to Scituate RI and lived in the Sperry family home on William Henry Rd. Over the next four years she had two children, Rob (1952) and Daniel (1954) while her husband worked at General Electric and worked at building their own house next door to her in-laws. A third child, Linda, did not make her appearance until 1966. Irene continued to work, and every summer the family drove south to vacation at Lake Arrowhead Campground on the then-unspoiled Golden Strand near Myrtle Beach SC. As the kids moved on, Irene and Ed enjoyed cruises and reunions with Ed’s Army Air Corp outfit. After her husband began working as an electrician at RI Hospital, Irene followed him into employment as a medical secretary at RI’s largest hospital. It was this position that she retired from. Edwin died in 1988, and after a period of mourning her husband of nearly 37 years, Irene stayed busy. She worked at the hospital, and after her own retirement she visited Cornwall England (where Ed had been stationed during the war) and Paris with daughter Lyn and grandson Nathan. Twenty years ago she boarded an Amtrak train in Providence and took it to Flagstaff AZ to spend a week in the Four Corners region with her son Rob and his daughters, Rachael and Hannah. She hiked, slept in a tent on the ground, and was an absolute delight to travel with. Irene’s own retirement did not slow her down much. Paquin family reunions were a favorite, with no alcohol and plenty of raucous laughter. She continued as a faithful congregant of St. Joseph’s Church in N. Scituate and spent Monday mornings counting money and keeping records of Sunday’s offerings. She volunteered at the Scituate Seniors’ meal site as well. She maintained her home on William Henry Rd. until 2015, when increasing frailty saw her move to the Elmhurst Nursing facility in Providence. She enjoyed her stay there, and loved the staff caring for her as they returned love and caring to her. In a funny coincidence, prior to being a nursing home Elmhurst had been Providence Lying-In hospital, a maternity unit, and all three of her children were born there. Irene is survived by two sisters, Cecile and Claire and her three children, Rob, Dan, and Lyn and their spouses. Grandchildren are Rachael, Kyler, Hannah, Nathan, Jackson, and Maya. She was well loved by both grandchildren and their spouses and partners. One of these, Erin Bilbo, arranged the beautiful flowers you will see at the service. We will never forget the twinkle in her eye, her sly wit and smile, and the love she showed to all of us. Visitation to which relatives and friends are invited will be Sunday, May 12th from 10-11:00 a.m with a funeral service to follow at 11:00 a.m. Burial will follow to Philip’s Memorial Cemetery in Foster. After the service and burial, all are invited to Dan and Ellen’s house for food and reminiscence.

Irene Rose Sperry (nee Paquin) was born December 26, 1929, in Providence, RI. Daughter of Henri and Blanche Paquin, she was the fifth of nine children. She grew up in a Providence French Canadian neighborhood where, both at school and at home,... View Obituary & Service Information

The family of Irene Rose Sperry created this Life Tributes page to make it easy to share your memories.