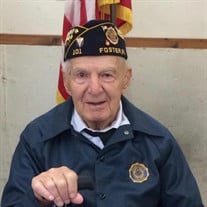 George William Newman, Sr., “Huffy”, of Foster, passed away at home on February 12, 2021. Born in Johnston, RI on January 29, 1925 to Mildred Cole and George Newman. His father died when George was 4 and his mother remarried Earl Pray. At age 13 moved to Hopkins Mills, Foster RI after the Hurricane of 38 damaged their home in Johnston. Served in the Army Air Corps during World War II from 1943-1946 as a P-61 airplane mechanic in the 549th Night Fighter Squadron; earned a Purple Heart from wounds suffered in combat on Iwo Jima. Discharged with the rank of Sgt. Returned to Foster where he lived the rest of his life. He was an active community volunteer – member of South Foster Volunteer Fire Company from age 14 to his death, serving as President for many years. Helped build the fire hall. Member of the American Legion Post 101, Foster, and the Veterans of Foreign Wars. Was Assistant Boy Scout Troop leader with Troop 101, Foster. Member of the Foster Old Home Days committee and Foster Preservation Society. Helped build (and rebuild) the Swamp Meadow Bridge. Member of the RI State and the Woonasquatucket Valley Firemen’s Leagues. One of eight children, he was predeceased by his sisters Virginia Newman Lawton, Jean Newman Sheldon, Shirley Newman St. Germain, Patricia Pray Coyle and Joanne Pray. Survived by his brother Burke Pray and sister Lee Pray Niles. Married to Catherine (Kay) Harrington from 1950 until her death in 2005. Trained as a carpenter, he worked for the state Division of Forestry (later Department of Environmental Management) from 1954, retiring in 1986 as Chief Fire Control Officer and Principal Forester. He then worked for Stewarts Heating and Oil until he left to care for Kay who had developed Alzheimer’s. While she was cared for at Nancy Ann Nursing Home, he visited her every day, and helped serve meals and do other tasks for the home, including baking cookies and cakes, which he continued to do for many years after Kay’s death. George enjoyed woodworking, gardening, cooking and reading, especially history. Survived by his sons George Jr. of Moosup, CT, and Daniel of Pomfret Center, CT and his wife Pamela, and daughter Ann Newman of Pawtucket, RI. Also survived by four grandchildren, 10 great-grandchildren and 7 great-great grandchildren. The Newman family would like to thank the team of caregivers who attended to George in his latter years, especially Joy Crochiere. A collation will be held at a later date. In lieu of flowers, please consider a donation to the South Foster Volunteer Fire Company, or the charity of your choice, in his name.

The family of George William Newman Sr. created this Life Tributes page to make it easy to share your memories.

George William Newman, Sr., “Huffy”, of Foster, passed away at...