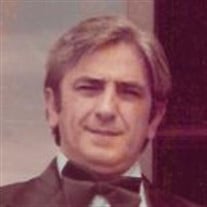 Frank J. Pafume of Johnston, died October 4, 2019 after a short illness. He was the beloved husband of Helen A. (Lloyd) Pafume. Son of the late Francesco and Sarah (Paratore) Pafume. He is survived by his son, Frank Pafume, Jr. of Providence;... View Obituary & Service Information

The family of Frank Joseph Pafume created this Life Tributes page to make it easy to share your memories.