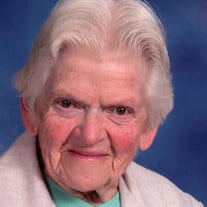 Guy, Eleanor Martha (Round), 89, of North Scituate, died Friday May 17, 2019 at Hope Hospice Inpatient Center in Providence. She was the beloved wife of the late Frank C. Guy. Born in Providence, RI, she was the daughter of the late Alvah W.... View Obituary & Service Information

The family of Eleanor Martha Guy created this Life Tributes page to make it easy to share your memories.