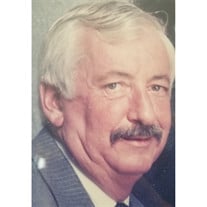 Edward T. Terrien, 81, of 1145 Bullocks Point Avenue died peacefully Thursday, June 8, at Elmhurst Rehabilitation and Healthcare Center in Providence after a long battle with COPD and cancer. He was the dear husband and best friend of Virginia Terrien for 45 years, and they raised their family on the Terrace in Riverside, RI. Born in Pawtucket, RI, Ed was the youngest child of the late Roland J. and Charlotte (Morris) Terrien. Ed worked in sales and production for Rex Venetian Blinds, as a painter for Regnier Associates, and as a baker and banquet manager for L M Carrs. He loved catering and served the famous, for example, Meryl Streep, Spiro Agnew, President Ford, folks at the America™s Cup Races or mansions in Newport and submarine launchings, as well as for the less famous, baking the wedding cake for his marriage to Ginny and cooking family dinners. He retired early to care for his beloved grandchildren. He was an Army veteran and served as a launching crewman in Battery A 738th in Merchantville, NJ. He was a member of the Riverside Evangelical Church, and past member of the Methodist and Baptist churches in Barrington, participating on the grounds committees and helping to prepare church suppers. Besides his wife, he is survived by his loving son, Justin Terrien and his family: his daughter-in-law, Kate Terrien; his grandchildren, Cheyenne, Dylan, and Connor; and many nieces and nephews. He was a brother to his late siblings Roland Terrien, Mary Evans, Jane Healey, Charlotte Terrien and Helen Bennet. Ed was an extraordinary son-in-law to Ethel Terrell; beloved brother-in-law to Leslie and Robert Nolting of Seattle, WA; the late Rosalee and James Bowles of Portland, OR; and Philip Terrell of Des Moines, IA. Ed rode motorcycles, enlivened many a social event, quoted Kerouac, was a fan of jazz, proved a loyal friend and deeply loved his family. He faithfully attended his son™s Boy Scouts events, motorcycle rallies, martial arts demonstrations and passed on his zest for life, fatherhood, and culinary skills to Justin. Ed will be deeply missed by his family and friends who knew and loved him because of his courage, his protectiveness, and his willingness to help. A memorial service will be held at 10 a.m. Saturday, July 1, at the Evangelical Covenant Church, 165 Rounds Avenue, Riverside. In lieu of a wake, there will be a gathering of friends and family at noon at the American Legion at 830 Willett Avenue in Riverside.

Edward T. Terrien, 81, of 1145 Bullocks Point Avenue died peacefully Thursday, June 8, at Elmhurst Rehabilitation and Healthcare Center in Providence after a long battle with COPD and cancer. He was the dear husband and best friend of Virginia... View Obituary & Service Information

The family of Edward T. Terrien created this Life Tributes page to make it easy to share your memories.