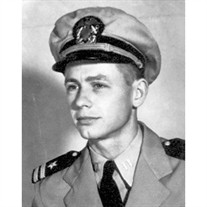 Earle N. Trickey, 93, passed away peacefully on Monday, February 19, 2018, in the company of his wife Mary and family, from complications associated with Alzheimer's disease. He was born in East Hiram, Maine, on June 5, 1924, the only child of Phil S. and Grace Lillian Noble Trickey. He graduated from Deering High School in Portland, Maine, in 1942, receiving an award for achievement in history.Earle Trickey was awarded an appointment to the US Naval Academy at Annapolis, commencing his plebe year in June, 1942. Commissioned in 1946, he was a member of the class of 1947, graduating in the top third of his class.His naval career was spent aboard the cruisers Houston and Juneau, submarines Cobia, Odax and Cero, and destroyers Dortch and Cassin Young. The Cassin Young, (DD 793) long retired, now functions as a museum berthed in Boston, next to Old Ironsides. Earle was also an instructor at the Naval Academy Prep School and Officer Candidate School in Newport. He achieved the rank of Commander.Following active duty he was employed by Raytheon Corporation as an editor and engineering writer. Earle planned an early retirement from Raytheon, allowing Earle and Mary to enjoy 25 years of RV excursions, visiting all lower 48 states as well as Alaska.Married June 30, 1951, at the historic Maine homestead of Mary's family, they recently celebrated 66 years of married life. Some of the happiest times of Earle and Mary's life together were spent in Maine, especially at Sebago Lake. There, they could enjoy the Maine that remained so familiar, and savor the company of friends and family. In addition to travel, Earle and Mary spent many happy years deeply involved in colonial re-enactments. One of his associations was with the Marine Detachment of the Sloop Providence. He was on the Board of Directors of Seaport 76 for many years. Re-enactments took Earle and Mary to many battle sites and parades in New England and along the Eastern seaboard, as well as Quebec, France and England. Earle was for many years Second in Command to the Regiment Bourbonnais. Two of his most meaningful re-enactments were his role in The Battle of Rhode Island in August of 1978, and the massive Battle for Victory at Yorktown, in 1981. Earle had attended the United Congregational Church in Middletown, where he served as Assistant Treasurer for 10 years. He was a former member of Newport Artillery Company; and a dedicated member of the Thursday lunch group that met at Yesterday's in Washington Square for many years. He had been a member, for many years, of Piscataqua Pioneers, a genealogical group that shared a common interest the early settling families of New Hampshire.In addition to his wife, the former Mary Douglas, Earle leaves three children: daughters Donna T. Nedderman (Bill), and Ada T. Souza, both of Middletown, and a son, Stephen W. Trickey of Los Angeles. He leaves one grandson, William H. Nedderman (Marisa) of Middletown. He also leaves a step-granddaughter, Channa Lincoln (David) of Tiverton, a great-grandson as well as a step great-grandson.Earle's family is immensely grateful to the staff of the John Clarke Retirement Center for their compassionate care. Their tireless efforts helped to make the final months more bearable.A memorial service will take place at the United Congregational Church, 524 Valley Road, Middletown, RI, on Saturday, March 10 at 1:00 pm. A reception will immediately follow. Interment will be at the Veterans Cemetery, Exeter, RI, at a later date. The family requests that memorial donations go to Alzheimer's Association, 245 Waterman Street, Ste 306, Providence, RI 02906, or to the United Congregational Church, 524 Valley Road, Middletown, RI 02842.

Earle N. Trickey, 93, passed away peacefully on Monday, February 19, 2018, in the company of his wife Mary and family, from complications associated with Alzheimer's disease. He was born in East Hiram, Maine, on June 5, 1924, the only child... View Obituary & Service Information

The family of Earle N. Trickey created this Life Tributes page to make it easy to share your memories.