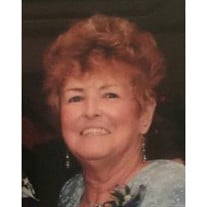 Donna Gail (Shaw) Gervasio, 75, of Foster, died Tuesday, March 14, 2018, at Miriam Hospital.Born in Providence, she was a daughter to the late Donald and Amy (Morey) Shaw. Donna was raised and educated in Warwick, RI, where she attended both the Bayside School and then the John Green School, before she and her family moved to Greene, RI in the 50's.It was in Coventry that her dad bought her and her siblings their very first horse "Linda" a Morgan Cross mare that he paid $50.00 for. Linda taught Donna the ins and outs of horsemanship and they could often be found " Pony Expressing" through the fields of their yard! She also attended the Western Coventry School. Her first job was at Lew Manufacturing Company in Coventry, RI until she began driving a bus in Hope Valley, RI.In 1972, she moved to Foster and began driving a Bus for Hopkins Transportation and soon after met the love of her life, Albert R. Gervasio. Together they built their home and raised their "His, Mine and Ours" family. In 1985 they bought their first Hereford Cattle "Miss Stick 102T" and "Miss Enfield" from Ray and Connie Tibbetts in Wilton, Maine, and thus began the cattle obsession their grandchildren continue today.Donna was incredibly proud of her pet deer "Bambi" and her Percheron Draft horses which she rode and drove until she was diagnosed with Schleroderma, Lupus and Raynauds Disease in her early 40's. She enjoyed their yearly drives to Florida, adventures with friends and hanging by the pool with her grandchildren.She is preceded in death by her sister Pat Ezzell and brother Donald Shaw. Donna is survived by her amazing husband Albert Robert Gervasio, her daughters , Laurie Ellis and her husband Steven Pettigrew, Sherry Griffiths and her husband Jared Griffiths, Rebecca Gervasio and her partner Michael Angelotti, one son, Albert R. Gervasio Jr., and his wife Carrie (Hogan) Gervasio, stepchildren, Deb Rioux, Tina Vangel, Paula Gervasio, Peter Gervasio (Jen) and Mark Gervasio (Joyce). Her grandchildren, Jared M. Griffiths, Jr., Jacob Griffiths, Jordan Griffiths and his wife Holli; Tyler Dexter, Kamryn and Macallie Forrest, Chandler Pettigrew, one great grandchild, Avery Jordan Griffiths. She is also survived by her loving sister, Diane Bragg and her husband Earl , two aunts, Hermina Miller and Carol Latham, one niece, Elizabeth Bragg and nephews, Donald Shaw Jr, Troy Shaw, Steven Shaw and David Millette. A memorial service will be held on Thursday, March 22, 2018, at 2:00 PM in the Winfield and Sons Funeral Home, 571 West Greenville Road, Scituate. In lieu of flowers, donations can be made to the Moosup Valley Volunteer Fire Station in her honor, 55 Moosup Valley Road, Foster, RI 02825.

Donna Gail (Shaw) Gervasio, 75, of Foster, died Tuesday, March 14, 2018, at Miriam Hospital.Born in Providence, she was a daughter to the late Donald and Amy (Morey) Shaw. Donna was raised and educated in Warwick, RI, where she attended both... View Obituary & Service Information

The family of Donna Gail Gervasio created this Life Tributes page to make it easy to share your memories.