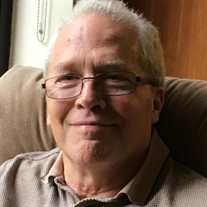 David G. Spencer, resident of Chepachet, Rhode Island, died peacefully Friday morning November 13, 2020. He was born May 26, 1947 in Norfolk, Virginia to Clarence Darrell Spencer and Frances Sherman Spencer. He attended school in Norfolk until he was 17. He completed his education in Missouri and graduated with bachelor and master’s degrees from Northeast Missouri State University (Truman University) in Kirksville, Missouri. He worked as a school psychometrist for the public schools of Kansas City, Kansas and Wyandotte County schools in Kansas. David ran training seminars for Trans World Airlines in Kansas City, MO, and afterward he developed a private counseling and consulting practice also in Kansas City, MO In March 1981, David married Barbara Kellner of Massachusetts. Later that year, they resettled in Foxboro. He worked for Bartholdi & Company in Wellesley until 1988. David then owned and operated Back Bay Resume and ran Spencer Consulting in the greater Boston area. After his wife's death in 1997, David worked for Comp USA in North Attleboro, Search International, Inc of Marblehead, MA, Rhode Island Regional Adult Learning in Woonsocket, Literacy Volunteers of Eastern Connecticut, as a car salesperson for a few years, and his final job was at Community Prevention & Addiction Services (now CHR) in Putnam, Connecticut. After 2011, David was diagnosed with Frontotemporal Degeneration. FTD is a slow debilitating brain disease, that removes one from communication, life, and love in a slow but maddening progression. Since January 2017, he had resided at Bayberry Commons in Pascoag, RI. David is survived by his partner of 18 years, Luci Palmieri, his two sons, Michael Spencer of Foxboro, MA and Thomas and Ronke Spencer, and grandson Akin of Providence, RI. He was the stepfather of Joel Zanella of Texas, Rachael Crist of Michigan and Renee Palmieri of Harrisville, RI. He is also survived by his brother Clay and Kitty Spencer of Columbia, MO, nieces Katie Ryan, Mollie Blackwell and nephews Sam and Matthew Spencer. David’s family wishes to thank the nurses and caregivers at Bayberry Commons, for the kindness they have shown him. Services are private. Memorial donations are suggested to The Association for Frontotemporal Degeneration at www.theaftd.org Hope in the Lord; For with the Lord there is mercy, And with Him is abundant redemption. Psalm 130:7 The Lord is near to those who have a broken heart, and saves such as have a contrite spirit. Psalm 34:18

The family of David G. Spencer created this Life Tributes page to make it easy to share your memories.