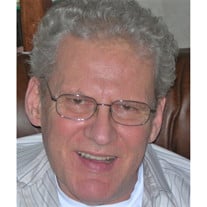 David Cole Bartlett, 70, died peacefully at his home in the arms of his loving wife , Claire, of 48 years, on February 11, 2015, in Warwick, RI after a long illness.David was a brilliant man, retired after having worked for many years at General Dynamics in Groton, Ct., prior to working as an electronics engineer for submarine sonar systems at BAE Systems, a government contract company.David was a Past Master of Hamilton Lodge No.15 F. & A.M. in 1985 and current member of Manchester Lodge No. 12 F. & A.M. He was also a member of the Freemason Grand Lodge of Rhode Island.He was a wonderful husband, father, grandfather and uncle. David™s kindness was known by everyone he met and who knew him well. He always had a smile for everyone, especially his beloved wife, Claire, his kids and grandkids. David was brilliant, yet humble and touched the hearts of many through his strong, quiet strength. His fun and gentle sense of humor brought joy and light to everyone.David was the beloved husband of Claire (Vaillancourt) Bartlett. He was also the dear and beloved father of Bethany L. Bartlett, of Fernandina Beach, FL, the late David Cole Bartlett, II Dave of Warwick, RI, Melissa E. Barry and her husband Scott Barry, of Billerica, MA, and Meredith R. (Bartlett) Bahl, of Vidor, TX. David also leaves behind his grandchildren whom he loved so very much; Kevin Kessel of Fernandina Beach, FL, Zoe Bahl and Timothy Bahl of Vidor, TX and step grandchildren, Julia, Brian and Emily Barry of Wilmington, MA.David was the son of the late Walter I. Bartlett, Sr. and Zylpha (Cole) Bartlett. David was the brother of the late Walter I. Bartlett, Jr. and late sister-in-law Lillian Nelson; Janice Evans, of Liverpool, NY ; the late Nancy Hagerty and brother-in-law James Robert Hagerty of Johnston, RI; Richard Bartlett and sister-in-law Ann, of Georgetown, GA; the late Judith Fullerton of Johnston, RI and brother-in-law William Fullerton, of MO; and the late William Bartlett and sister-in-law Joyce Bartlett of Scituate, RI. He was also the brother-in-law of the late John F. Vaillancourt and his wife Frances Vaillancourt of North Providence, RI and Theresa (Vaillancourt) Fairhurst and her husband.David also leaves behind many nieces and nephews and great nieces and nephews whom he loved very much.Visitation will take place on Monday February 16, 2015, from 4 7 pm at Winfield & Sons, 571 West Greenville Road, Scituate, RI. A service for David will immediately follow at 7 pm. Interment of his ashes will take place on Tuesday February 17, 2015 at 2:30PM open to family and friends, at Hopkins Mills Cemetery, (Corner of Route 6 and Rams Tail Road), Foster, RI.In lieu of flowers, donations in David™s name can be made to Dana Farber Cancer Institute/Brain Cancer Research, 10 Brookline Place, West Brookline, MA 02445; or Butler Hospital Memory and Aging Program Research, Foundation Office, 345 Blackstone Blvd., Providence, RI 02906

David Cole Bartlett, 70, died peacefully at his home in the arms of his loving wife , Claire, of 48 years, on February 11, 2015, in Warwick, RI after a long illness.David was a brilliant man, retired after having worked for many years at General... View Obituary & Service Information

The family of David Cole Bartlett created this Life Tributes page to make it easy to share your memories.

David Cole Bartlett, 70, died peacefully at his home in the arms...