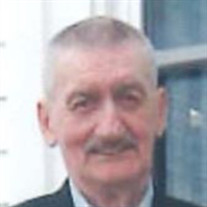 Charles Thomas James, 90, of Dean Avenue in Johnston passed away Wednesday, February 26, 2020. Born in Cranston RI., he was the son of the late Lionel Henry James and Mary Elizabeth (Whitney) James. One of ten children, Mr. James served this country for twelve years during and after the Korean War as a Private, First Class (PFC). He was a participant in Operation Teapot and received a “National Defense Service Medal” as well as a “Good Conduct Medal” while stationed in New Mexico at the Kirkland Air force Base in Albuquerque. Kirkland Air force Base at that time was a nuclear test facility, conducting top-secret test missions to help protect and serve this great nation. Later in life, Charles reenlisted in the Army National Guard to finish out his distinguished 32-year career in the United States Armed Services. Charles was a communicant and proud let’ leader of the People’s Baptist Church, 1275 Elmwood Ave in Cranston, RI. His commitment and passion for his church intertwined throughout the fabric of his love for family, God and country. He was married for 43 years to his beloved wife Marjorie Anne Viveiros, James. His only remaining sister, Lillian C. Hassett survives Charles along with his stepchildren, Elizabeth, Michael, Jeffery and Mark Viveiros. He also leaves behind several nieces and nephews, all of whom loved and cherished “Uncle Chuckie” or sometimes just called, “Unc”. He was the brother of the late George C. James, Louis L. James, William V. James, Allen H. James, Gordon A. James, Dorothy I. James, Marjorie H. Martini and Susan E. Whitehead. There will be a celebration of his life memorial at the People’s Baptist Church on Friday, March 6th 2020, beginning with a service at 11:00 a.m. A Burial with Military Honors will be held at the Rhode Island Veterans Memorial Cemetery Exeter, RI, beginning at 12:30 p.m. sharp.

Charles Thomas James, 90, of Dean Avenue in Johnston passed away Wednesday, February 26, 2020. Born in Cranston RI., he was the son of the late Lionel Henry James and Mary Elizabeth (Whitney) James. One of ten children, Mr. James served this... View Obituary & Service Information

The family of Charles Thomas James created this Life Tributes page to make it easy to share your memories.

Charles Thomas James, 90, of Dean Avenue in Johnston
passed away...