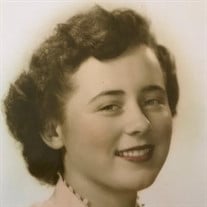 Barbara Anne (Lovely) Clarke, 87, passed away on Thursday, October 8, 2020, at Wingate at Sharon, after a lengthy illness. Barbara was born on January 7, 1933, in Attleboro, MA, to the late Frederick and Barbara (Griffin) Lovely. She was a graduate of Mansfield High School class of 1950 and a graduate of Fisher Junior College class of 1978. She was a legal secretary and office manager for many years, culminating her career as Assistant Registrar of Probate for Bristol County. Barbara is survived by her four children - Daniel and his wife, Roberta, of Norton, Michael and his wife Roxanne, of Norton, David and his wife, Julie, of Scituate, RI, and Debra Kennedy and her husband, Stephen, of Norton. She is also survived by eight grandchildren - Jessica, the late Alexandra, Dean, Erin, Christopher, David, Norah, and Owen, and two great grandchildren, Elliott and Lorelei. Barbara was the sister of the late Richard Griffin, Donald Lovely, and Judith Selig. Barbara devoted her life enjoying her children and grandchildren, and loved her home and beloved poodle, Taffy. A very sweet and kind person who touched many people's lives, she enjoyed spending time with her family and vacationing on Cape Cod with her children and her sister Judy. Barbara was a beloved daughter, mother, grandmother, and friend. Many memories with her will remain part of our hearts forever. We would like to extend a special thank you to Wingate of Sharon and West River Hospice for their loving care. There will be a private service and burial attended by her family.

Barbara Anne (Lovely) Clarke, 87, passed away on Thursday, October 8, 2020, at Wingate at Sharon, after a lengthy illness. Barbara was born on January 7, 1933, in Attleboro, MA, to the late Frederick and Barbara (Griffin) Lovely. She was... View Obituary & Service Information

The family of Barbara Anne Clarke created this Life Tributes page to make it easy to share your memories.