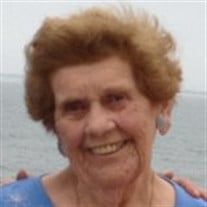 TRIBUTE TO ANNE (Anne with and e)My Mom&#157; A BEAUTIFUL LIFE, A BEAUTIFUL WOMEN&#157; As I look back, I think of my wonderful life, although when I was young, I thought everyone lived the way we did.My mom would love to reminisce about her... View Obituary & Service Information

The family of Anne B. Mongeon created this Life Tributes page to make it easy to share your memories.

TRIBUTE TO ANNE (Anne with and e)My Mom
A BEAUTIFUL LIFE, A...