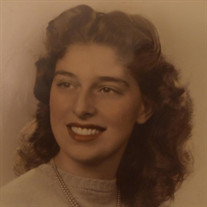 Manchester, Angela (Saccia), 90, of South Kingstown, RI, passed away on Monday December 7, 2020, at home with her children and grandchildren at her side. Born in South Kingstown on February 13, 1930, she was the daughter of Matteo and Paolina (Martella) Saccia and sister of the late Margharita Yemma. Angela is pre-deceased by her husband, John Francis Manchester. Angela graduated from South Kingstown High School in 1948 and kept in touch with her classmates at yearly class reunions, often at the home of classmate Charlie Sweet. In addition to raising three kids, she also found time to work as a hostess at the Larchwood Inn in Wakefield, store manager at Sears Roebuck in Wakefield, nursery school teacher, bank teller, and owner and operator of Trestle Antiques in Peace Dale. Angela lived her entire life on Paddy Hill in Peace Dale, but enjoyed several vacations around the US and Europe with husband John, Margharita and Frank Yemma, and to Italy where she visited her parents’ ancestral home near Rodi in the Puglia region. Angela’s greatest joys were her three children: John and wife Susan (Gould), Kathleen and husband Richard Stetson, and Paul and wife Holly (McCabe), four grandchildren: Jaclyn Hogan, Kyle, Erica, and Hallie Manchester, and three great grandchildren (courtesy of Jaclyn and Rick Hogan): Thomas, Raegan, and Finnean. Angela kept dear friends from as far back as her high school days, but continued to grow new relationships with people young and old who were drawn to her kind and caring nature. She will be missed by us all. A memorial service will be announced at a later date. In lieu of flowers, a memorial donation may be made to Hope Health, 1085 North Main Street, Providence, RI 02904

Manchester, Angela (Saccia), 90, of South Kingstown, RI, passed away on Monday December 7, 2020, at home with her children and grandchildren at her side. Born in South Kingstown on February 13, 1930, she was the daughter of Matteo and Paolina... View Obituary & Service Information

The family of Angela Manchester created this Life Tributes page to make it easy to share your memories.