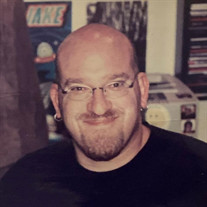 Alex Mark Kimmell, 51, passed away peacefully at home on December 3, 2021, after an almost two-decades-long battle with multiple sclerosis and cardiomyopathy. Predeceased by his father Steve Kimmell, survived by his mother Patricia “Pat” Kimmell (nee, Dinkin) of Simi Valley, California, his loving and full-spirited wife, Melissa (nee, King), sons, Jonah and Gabriel of North Scituate, Rhode Island, sister Jodi McAlpine (nee, Kimmell) and her son Brendan McAlpine both of Simi Valley, California. Alex also leaves many extended family members stretching from New England to the West Coast. Alex found his love of music and desire to bang on the drums at age 10. With a healthy dose of support from his parents (and to the annoyance of his sister), he spent hours playing along to his favorite albums and honing his craft. This passion allowed him to study and graduate from the University of California via scholarship wherein he pushed the boundaries of the drum kit. Legend has it that he played the cymbals using a cello bow during his senior recital. His artistry allowed him to tour Europe and Japan playing jazz and continued the jazz scene in Los Angeles including playing at more weddings and bar mitzvahs than can be counted (Freeness by Dudeness). Alex also entered the rock scene in Los Angeles playing in several bands at some of the famous venues like the Whiskey a Go-Go, the Roxy Theatre, and the Coconut Teaser, as well as many clubs all over Southern California with the bands Out Vile Jelly, GAS, Elbowpop, and Stewboss, as well as sitting in playing drums for a number of other bands and musicians following their dreams. Alex was in many side projects with his closest friends such as the Bards of Passion and Mirth, and rumors that he danced with bells are indeed fact Alex also pared down to open mic nights when he stretched his wings to play guitar which led him to front his band, twodoggarage. The only thing he had a passion for more than music was finding the love of his life and starting his own family. Alex and Melissa fell in love quickly and were blessed with two amazing sons. Unfortunately, Alex’s health had different plans than touring the world playing music like many of his friends and bandmates. In time, Alex could no longer use his hands to play the drums to the level he was so familiar with and was advised to move to a colder climate to help him manage his illnesses. Alex and his family moved to Rhode Island to start a new and exciting chapter for all of them. Alex had written so much music over the years that he started funneling that talent and inspiration into writing fiction. Alex said that writing in the horror genre was cathartic to what he was physically experiencing. Alex’s new medium allowed him to join a welcoming and supportive community of writers all over North America including the Association of Rhode Island Authors, (wherein he was part of the “Dark Corner”), and a tight-knit band of exceptional writers, the Quillies. Alex was a creative, sweet, and hilarious man who always wore his heart on his sleeve. His smile would light up any space and his boisterous laughter was infectious. Alex was quick with a joke, had more musical knowledge that should be legal, had a strong moral compass, was a voracious reader, a lover of all things science fiction and horror, wanted the world to be a better, more loving place, and a profoundly good man. Alex was lucky to have watched in awe as his sons grew into wonderful young men. Most importantly, Alex was loved by so many and he gave that love and friendship back to the point that you could feel it in your marrow. Although the world is a darker place without him here, those that knew him can be assured that now he has no more physical pain and we were profoundly lucky to have known and loved him. A Celebration of Life gathering will be held on Wednesday, December 15, 2021, at Winfield & Sons Funeral Home, 571 West Greenville Road, Scituate, Rhode Island, at 5:00 pm (EST). For those who are unable to travel and attend in person, please use the following Zoom link: https://us06web.zoom.us/j/89343734359?pwd=eFR5Qm5QRnowTVZxMEpLTEx0bmE3QT09 Please note that Alex received exemplary care through therapeutic nursing, palliative care, and hospice care in the hands of VNA of Care New England. Alex and his family were blessed to have invaluable care and support from all levels of their staff. In lieu of flowers, please make a donation in his name to support their mission during such difficult times for families. https://www.vnacarenewengland.org/

Alex Mark Kimmell, 51, passed away peacefully at home on December 3, 2021, after an almost two-decades-long battle with multiple sclerosis and cardiomyopathy. Predeceased by his father Steve Kimmell, survived by his mother Patricia &#8220;Pat&#8221;... View Obituary & Service Information

The family of Alex Mark Kimmell created this Life Tributes page to make it easy to share your memories.

Alex Mark Kimmell, 51, passed away peacefully at home on December...