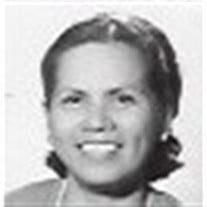 Saban, Agripina R., 89 of Oak Street Providence died at RI Hospital on March 1, 2015. She was the wife of the late Gerardo Raganas Saban. Born in the Philippines was the daughter of the late Florentino and Isabel ( Tano ) Resurrection.Mrs Saban... View Obituary & Service Information

The family of Agripina R. Saban created this Life Tributes page to make it easy to share your memories.